Callum Voisin made his GB3 debut at Oulton Park last weekend for the opening round of the British GB3 championship with Carlin Racing.

After completing a successful pre season testing schedule getting to know the new GB3 cars for 2022, Callum Voisin was ready and raring to go heading into his first qualifying session of the year. The 20 minute session got underway and Callum managed a time that would see him start race 1 in 5th and race 2 in 6th – a fantastic effort for the youngsters first official qualifying of the year.

Race 1 would begin and Callum made a reasonable start. Unfortunately later on that lap contact would be made between Callum and his team mate Sagrera. The knock on from this contact would see Sagrera retire and see Callum sustain significant front wing damage would then affect the cars ability to turn in. This in turn saw further contact which inevitably saw Callum head to the pits for a new front wing. Callum would cross the line in 20th, but still managed to set the 3rd fastest time of the race.

Race 2 would see Callum line up in 11th after a 5 place grid penalty from the second contact in race 1. Callum made a fantastic start and soon began to make progress through the field. As the race settled down Callum got into a great rhythm. Hustling his Carlin prepared machine Callum soon made his way passed 2nd year driver James Hedley up into 9th where he crossed the line. 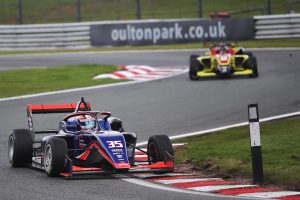 Race 3 would see the full reverse grid and would Callum line up P15. A great opening lap saw Callum make 2 places and up into P13. As the race settled Callum got into his usual rhythm and brought the #35 Carlin car home in 13th position.