Solid weekend at Monza for Gamble In WEC 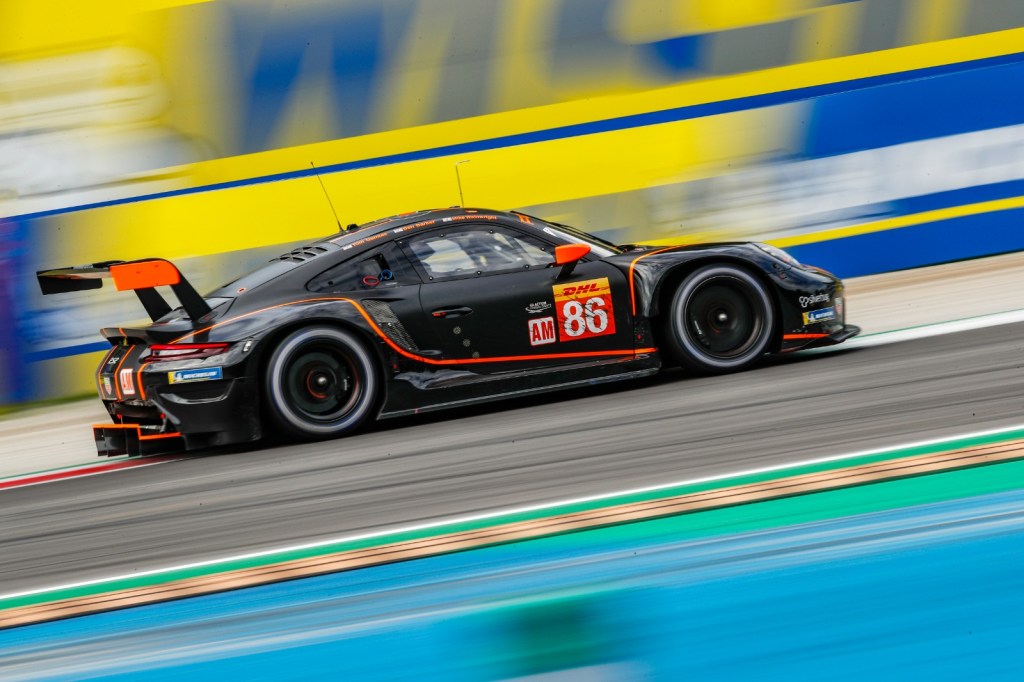 Solid weekend at Monza for Gamble In WEC

For GR Racing, this weekend was a chance to build on the hard-won pace and experience taken from the team’s last outing in Portimão. For both fans of the number 86 car and the team, there was good reason to be optimistic about this weekend’s running.

The No. 86 has consistently built on its pace and performance in every session of the 2021 season so far. With the team’s newest driver, Tom Gamble, landing a podium position in the ELMS 4-hours of Monza just one week earlier—GR Racing brought strong competition to the third race of the season

On Saturday, it was business as usual for the Toyota LMH team as the straight-line speed of the hybrid machines was enough to see the team pull ahead of the No. 36 Signatech Alpine and take a dominant 1-2.

In LMP2, it was the No. 31 Team WRT who put in a lap to narrowly claim pole position ahead of the No. 22 United Autosports.

Behind, the closest fought and most hotly contested category of the race belonged to GTE Pro. Less than four-tenths separated the group as they fought two duels that pitted Porsche against Ferrari for 1st and 3rd place.

In GTE Am, the No. 33 TF Sport of Ben Keating took a handy pole position ahead of the field. More than half a second behind, the Cetilar Racing No. 47 and Team Project 1 No. 56 would qualify with barely a tenth of a second between them. GR Racing crossed the line in 13th, delivering the fastest lap of the weekend so far for drive Mike Wainwright.

When the race got underway at noon on Sunday, the highly anticipated addition to the calendar proved to be one well worth waiting for.

Racing hard into the first corner, the No. 36 Alpine attacked the Toyota’s, briefly taking second before being outmuscled by the hybrid powertrain.

For Glickenhaus, the addition of the team’s second entry for Monza quickly became a race of split fortunes. The 709 car looked exceptionally strong, challenging the Alpine at points, for third. The No. 708, however, suffered from early issues, limiting its pace from the very first lap.

In the GTE AM race, the No. 83 AF Corse, forced to the back of the grid by stewards’ decision, was now making strong progress with their most experienced driver to run second in category as they closed out their first stint.

Approaching the first 30 minutes into the race, a full course yellow was thrown to recover the No. 88 Dempsey-proton car from the gravel. A chance for teams to take a low-cost pit stop against their competitors—an opportunity to look at all the available strategy decisions.

In the No. 86 car, Mike Wainwright came into the pits, staying behind the wheel to take a double opening stint. By the end of the first hour the team had climbed to 11th, continuing to gain places in a close-fought category.

After 90 minutes of intense action, the story of the race took its first dramatic twist. The second-placed Toyota number 8 suffered technical issues that saw the car slowing to a crawl and back into the pits. A second Hypercar in trouble.

By the time Ben Barker got in the car for his first stint, GR Racing were breaking into the top 10 and making strong progress into the race.

The start of the third hour, however, was to yield another turn in the story. The No. 33 TF Sport, leading the GTE AM field from pole, suffered a catastrophic and high-speed tyre failure that saw the front left corner of the car completely destroyed on track. Debris meant a much-needed safety car was sent out. Once again, the chance to shift to an alternate strategy and try a new approach emerged.

While many teams pitted for a low-cost stop, GR Racing stayed on track and took initiative and track position against their closest rivals. By the time Tom Gamble took his first stint of driving duties, the team were running 5th in their class as the young driver continued to advance the pace of the car with exceptionally quick lap times.

The two stricken Hypercars both saw significant time in their garages for issues that neither team could seem to shake.

The No. 86 car was readily trading lap times with its nearest neighbors through the middle of the race—demonstrating both the pace and fight to battle at the front of the field.

As is often the case in racing, an upturned result is often only a mechanical, electrical, or fateful glitch away. This time, it was Toyota that looked to close to disaster as the leading No. 7 car suffered a power failure that saw the team stop on track.

Unknown to both fans and competitors, the Glickenhaus was suffering from technical issues of its own. The 709 car, now leading, needed an 8 minute stop that handed the initiative straight back to Toyota. With the No 708 and No. 8 cars officially retired, the Hypercar field was thinning fast.

Ultimately, the No 86 was struck by racing fate too, as a splitter failure meant an extended pit stop was required to change the part in the box. Tom Gamble got behind the wheel to begin the team’s penultimate stint from 7th.

Amongst the mixed battles, traffic, and fortunes—the last hour of racing proved to be as impossible to predict as the first. Even the outright win was still on the table as the No. 36 led the chasing No. 7 on reliability, pace, and merit.

In GTE Am, after starting from last on the grid, the No. 83 AF Corse drove a flawless race to secure the category win, as did the No 22 United Autosports in LMP2. Few other positions on track were quite so safe from being challenged. Reliability, remaining pace, and on-track fortune were about to make or break many close races.

With 40 minutes remaining, Mike Wainwright took the final stint for GR Racing. The No 86 emerged from the pits in 8th place and their own points battle still to win.

Ultimately, and cruelly for some, it was a final full course yellow that would play a significant deciding role in the contest.

For the No. 7, it was a pressure release, a chance to take on much-needed fuel in a low-cost stop to see the team run to the end without pressure from the No. 36 behind. For the No. 709, it meant disaster, an end to their podium hopes—no longer able to challenge the No. 22 United Autosports for 3rd.

GR Racing crossed the line in 9th, a handful of positions gained throughout the race and additional points earned for the championship standings.