Tom Gamble stepped back into his ELMS LMP2 role with United Autosports last weekend teaming up with Phil Hansen and Duncan Tappy for a 2022 title assault.

Now a Gold rated driver, Tom was given the opportunity to take part in qualifying ahead of the 4 hour race. Instantly setting purple sectors in the short session Tom would set a time good enough for the front row in P2 (only half a tenth off pole) after his first set of new tyres. The United Autosports pit crew would then put a second new set of goodyears on the #22 Oreca-07 ready for one last attempt at pole position. Unfortunately a car stopped on track and no further times were allowed as the officials red flagged the session.

Phil Hansen would start the 4 hour race. The #22 Oreca-07 swept into the lead after 13mins, having started second on the grid after Tom Gamble’s valiant qualifying efforts. Hanson set a series of fastest laps – ultimately missing out on the outright fastest time by 0.015s in the closing stages. Happy would jump in and after a great pitstop headed out for his stint. Disaster then struck 6 laps in as Tappy picked up a puncture. Having to box out of sync and replace the front left tyre ultimately cost the #22 victory as they lost 58 seconds in the pits. Tappy would re appear in a lonely 10th position. Gamble then jumped in for the final hour or so of the race , running solidly inside the top-10 throughout. Tom fought hard, made some amazing overtakes, but ultimately not having enough time to make an impression on the lead cars and crossed the line in seventh place. 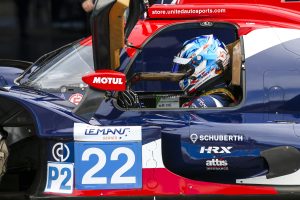 “It’s a frustrating result considering our quali and race starting pace. Punctures happen and we’ll all bounce back from it. We had a very strong car today, can take away many positives and now focus on Imola.”