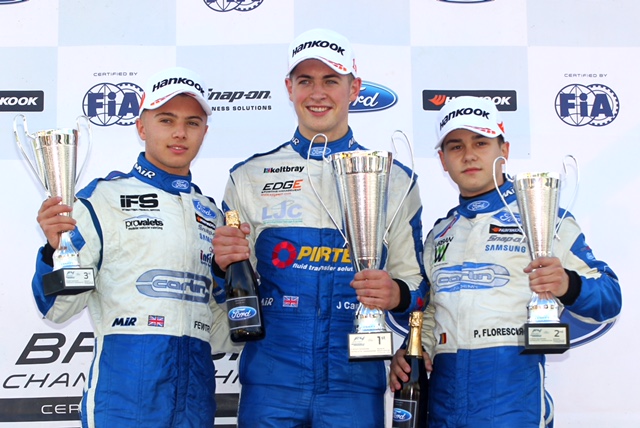 On October 4, 2016, Posted by Eddie Reynolds , In Driver News, With No Comments

17 year old Jamie Caroline came into the final weekend of the British F4 championship at Brands Hatch with one thing in his sights, victory.

A rather wet qualifying session played into Caroline’s hands perfectly. Jamie’s wet weather skills have seen him produce some outstanding drives through the field in previous races, but now it was time for him to prove those skills under qualifying conditions. Setting the timing screens a light with fastest ‘purple’ sectors Jamie was looking in a league of his own. A quick visit off the circuit at Druids corner mid session didn’t seem to hamper the ‘rain master’ one bit and Caroline ended the session with double pole position by quite a considerable margin.
This elation was to be short lived however as a small technical infringement saw Caroline’s two pole positions turn into starting last with a 10 second penalty.

Race 1 would see Caroline line up last. A glimmer of hope came in the shape of rainfall on the green flag lap. On slick dry tyres the start of the race would be a tricky one. The lights went out and as the pack hurtled away, Caroline had to sit for an agonising 10 seconds before he could get underway. Slowly but surely, Caroline’s wet weather skills began to show, setting fastest lap after fastest lap, and not only catching the pack, but putting on some outstanding overtakes in awful conditions. He eventually got himself up to P7, and was 1.5 seconds a lap faster than anyone else!
Thankfully the chequered flag came out when it did as finishing in P7 meant that Caroline would have the reverse grid pole position for race 2. 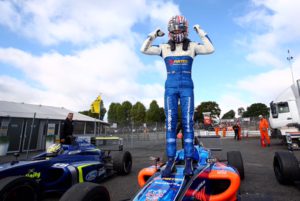 Race 2 was Caroline’s opportunity to take his maiden win in British F4. Having had his double pole position taken away from him, he was focussed on victory.
The lights went out and Caroline made a fantastic getaway and led the pack into paddock hill bend. Caroline’s pace on cold tyres was truly unbelievable, and by the end of lap one, he already had a lead of 2.2 seconds! Caroline then drove an inch perfect race, extending his lead every lap. By the time the last lap board came out, Caroline was 4.7 seconds clear of the rest of the pack. Caroline took the chequered flag and his maiden victory in true style for race 2. 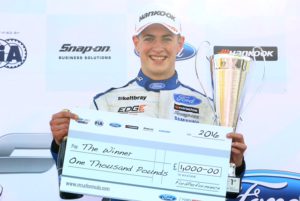 Again Caroline would start from the back of the grid for the final race of the 2016 British F4 season. A good start saw Caroline begin to work his magic and carve his way through the pack. By the end of lap one he had already made 5 places up. As the race settled down Caroline would continue to pick off the field and as he came across the line he had driven up to 9th position, again, proving that his talent for overtaking is second to none.

Jamie commented, “Not the best start to the weekend having the two pole positions taken off me, but I’m so happy with race 2. It all went perfectly and I’m over the moon to have finally got a win in F4! I have to say a huge thanks to Pirtek, Keltbray, Mr Lee noodles, the Edge Management boys, Bodyclinic, James Munday, and of course my amazing family for always supporting me!”

Edge Management said, “We are so happy for Jamie. His wet pace was off the scale this weekend, and qualifying was a real show and tell of what this boy is capable of! Jamie’s victory was a stunner – winning by nearly 5 seconds, at this level, is no easy achievement. The boy drove his socks off this weekend and we are extremely proud of him.”