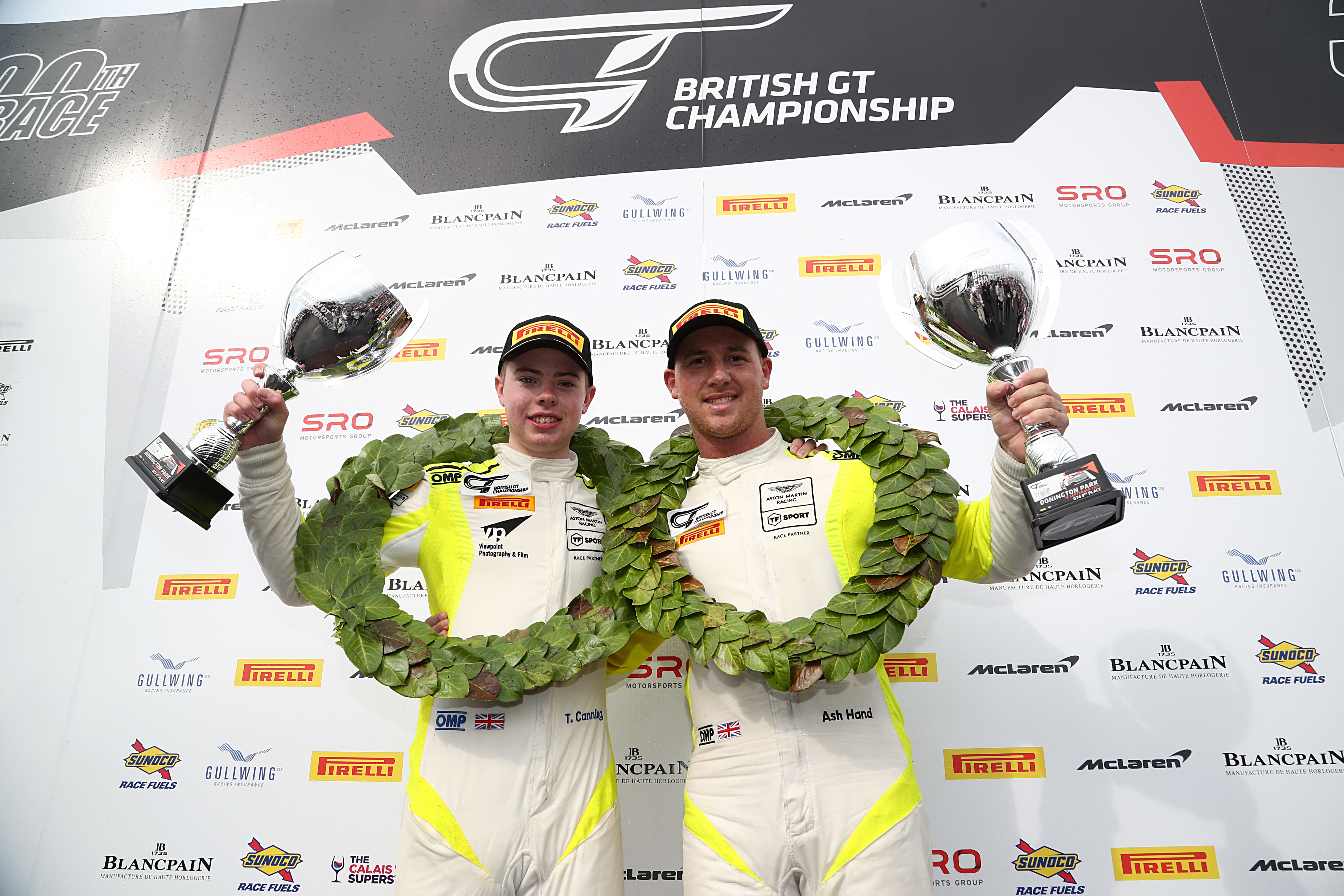 On September 18, 2019, Posted by Eddie Reynolds , In Driver News, With No Comments

Aston Martin Academy driver Ash Hand and team-mate Tom Canning secured both the British GT Silver GT4 Championship and the overall GT4 Championship titles as the series reached its final round at Donington Park.After finishing the practice sessions in fourth and first place, the Aston Martin Academy managed to take the TF Sport Aston Martin Vantage AMR GT4 to the front row of the class, finishing just 0.376 seconds behind the car on pole position.Hand would watch on as team-mate Canning took the opening stint of the 2-hour race, the young racer drove a steady first half of the race, leading the class as their title rival raced on in fifth place.Following their success at Brands Hatch, they had to serve a ten-second penalty in the pitlane while Hand took over the drive for the final stint. While the pitstop dropped the #97 Aston Martin Vantage AMR GT4 behind the class leader, they were in a prime position to maximise on points for the title.

In the closing stages of the race, Hand was under pressure for second place, knowing that the championship was at stake, he conceded the position to bring home the car in third place, and in doing so securing the first GT4 title for TF Sport, and being part of a historic year for Aston Martin, who took six of eight titles available in the British GT Championship in 2019. 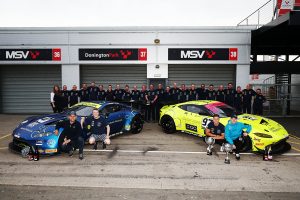 Ash Hand #97 TF Sport Aston Martin Vantage AMR GT4
Winning the championship“It is a pretty amazing feeling to have won the championship; looking back to the start of the season at Oulton Park we had not driven the car at all. We started the season without any testing, knowing the car or the team, or even knowing my team-mate Tom Canning, it was a tall order.“Myself, Phil and Eddie at EDGE Sporting Management knew that if we got it right, put the work in, and put the effort in, we could potentially get the championship win at the end of the season. They were really backing me and I had good support behind me. I’ve worked with Phil for a long time with driver coaching so we knew the capabilities of what we could do, it was just a case of how quickly we could learn the car and get our head around everything.“So going from that at the start of the season to reaching our goals of winning the British GT4 Championship is amazing. Throughout the season we’ve had so many great races where we’ve maybe not qualified that well, but we’ve driven through the pack and managed to get a really good result.“It’s been an amazing season and to turn over that points deficit at the start of the season to end up as champions is incredible, it feels amazing. “The journey that we’ve been on to get here has made it even more special, purely because I haven’t been in a car for three years, so to come back after so long out of racing, it’s something that dreams are made of.“Heading into the season we wanted the title, but after being out of the car for so long it was a tall order, you lose a lot of experience just being out of a car. It’s been more difficult than I thought it would be in terms of getting back into it, I think it took me until about halfway through the season to learn how to drive the car, it’s a huge achievement but the journey makes it even more special.”The Donington Park race“We went there with a great plan with the team, the guys at TF Sport did a great job with what results we needed to achieve, where we needed to be in the practice standings, worked out where we needed to be in qualifying, we achieved our qualifying results and were dominant in practice, so did a fantastic job of organising our selves in terms of the championship, our pace was great, the only point that we were nervous was when we were in the actual race as anything could happen. “We never thought the title was out of reach, purely because of how hard everyone has worked over the season, how things seemed like they were falling for us over the weekend; all we had to do was make sure we did our job and we knew the title would be ours.”Being part of Aston Martin’s incredible British GT season“It feels incredible to be part of the most successful season with Aston Martin in terms of championships.“We started this journey with them with a new car for the season, the GT4 Vantage was new to the grid, so be able to take that car with Aston Martin and win a championship in its first year was amazing.“I know Graham Davidson and Jonny Adam did an amazing job to get their title as well, so to just be a part of that and to be part of the team that has managed to achieve so much in the first year of the new car is incredible.“It will be something that goes down in history for Aston Martin, so to just have your name associated with that is an amazing feeling.”A big thank you to Aston Martin, TF Sport and EDGE Sporting Management“I’d just like to say that the guys at AMR and TF Sport have done such an incredible job, we qualified on the front row at Brands Hatch, so we were in an amazing position to take points, but overnight we had a problem with the car and the team worked throughout the night and up until the start of the race.“So there have been points throughout the year that TF Sport has gone above and beyond to manage to make sure this car worked and to produce a car that can get results at every single round. “We haven’t had any failures in terms of the car in the races, it’s been so reliable and its a credit to them.“There’s no way as a team that we could have done it without any of them. Every single person has done an amazing job, so thank you to them, and thank you to Phil and Eddie at EDGE Management, they’ve done an incredible job to get me back into this position, and Aston Martin for producing such an incredible car to race in this season.”
Tom Ferrier, TF Sport Director
“They are very young and super-aggressive and yet make very few mistakes. A flawless performance from the pair of them today and I’m delighted for both –  superstars of the future. Congratulations.”Chris Warne, TF Sport GT4 Team Manager“It’s been a hard season, but the TF boys and drivers have done everything we have ever asked of them. They have all worked so hard – so it is a fantastic and well-deserved reward.”