Round three of the BRDC British F3 Championship got underway at Rockingham Motor Speedway last weekend, and Enaam Ahmed was looking to improve on his unfortunate component failures from round two at Brands Hatch two weeks prior. 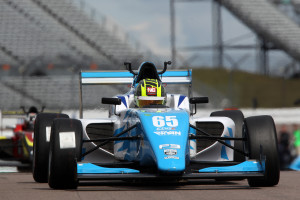 As qualifying got underway Ahmed chose to hang back in the pit lane to gain some clear track space to be able to utilise the best of his new tyres. Mid way through the session and with Ahmed sitting in P4, the Red Flags were out to recover a stricken competitor. The session resumed with only 10 minutes left and Ahmed chose to not put on 4 new slick tyres but to save two of them for the races. This bold move saw Ahmed drop down the order to P7 at the end of the session, but he would have two new tyres to use during the race weekend.

As the lights went out for Race 1, Ahmed made a great getaway and was up into P6 by the end of lap 1. As the race settled down Ahmed did a fantastic job of keeping the chasing pack far enough behind as he attempted to make an impression on the lead 5. Unfortunately as the laps came down and the chequered flag fell, Ahmed was unable to make an impression on the lead pack and finished race 1 in P6. With the reverse grid for race 2 being the top 8 reversed, Ahmed would start the next race in P3.

Race 2 was set to be Ahmed’s race starting from P3. As the lights went out Ahmed made one of his trademarks starts and was soon in the lead! Unfortunately for Enaam, there was to be a huge crash in the pack behind and the race was red flagged. With the carnage cleared up, the cars would re grid in the same order as the original start. Enaam again started from P3 and slotted into P2 from the off. As he approached turn 1, and with the lead pack jostling for position, it was Ahmed that was to be the victim this time as he lost his front wing from contact from Vaidyanathan. Having to pit for a new nose cone, Ahmed would now try to get the fastest lap of the race to aid his race 3 grid position. Unfortunately during the contact at turn 1, his tyres were heavily flat spotted so he was unable to obtain the lap time he wished.

Race 3 would see Ahmed line up in P6. The lights went out and Ahmed struggled to get his Douglas Motorsport car off the line cleanly and dropped back to P7. The safety car was deployed due to an accident ahead which promoted Ahmed up to P6. Upon the re start Ahmed a small mistake and he dropped back to P7 momentarily but he soon made an awesome move around the outside of Huovinen to re take his 6th position. As the clock ticked down, Enaam pushed to catch the P5 place of Toby Sowery, and on the last lap, Enaam made his manoeuvre and crossed the line in P5! 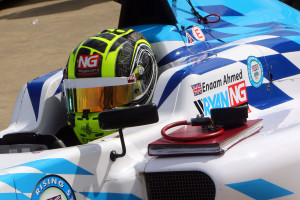 Ahmed commented, “I can’t believe how much bad luck we have ha since Snetterton! Last round was component failure, and this time I was just in the wrong place at the wrong time and I got damage. If we hadn’t of had the red flag also, we would have won race 2 for sure. I have now got to focus towards Oulton and collect some good consistent points to keep me with the lead pack of the championship.”

Edge Management said, “Enaam is having a pretty bad run of it at them moment, but as we keep telling him, it’s these kind of situations and how he reacts to them, learns from them, and also develops from them, is how you differentiate top line drivers from mid range drivers. He will bounce back at the next round and be back where he belongs, on the podium!”